My god, I have been missing out. Admittedly, I’ve never been a fan of Korean dramas — they’re usually unrealistic, pathos-filled, campy fairytales that make my stomach churn. I’ve been presumptuous, though. I thought Korean cinema would be no different, but oh how wrong I was; A Bittersweet Life shattered all my concerns and expectations about it.

Unlike its TV drama counterparts, A Bittersweet Life was refined, clean, and effortless, a film that alludes to the nostalgic days where film noir and still frames reigned king. Its plot is neither complex nor absurd. There are no surprises — everything is laid bare for you to see. It’s a very honest movie, a simple tale of revenge. It grips you with all its might, but remains strikingly calm and confident. It just oozes the excellence.

Our hero Kim Sunwoo (Lee Byung-hun) is a young, high ranking mobster and enforcer for the crime boss Kang (Kim Yeong-cheol). Sunwoo is cold, calculating, and ruthless — all qualities that earn him sincere trust from his boss. His prospects are promising and secure, he is a rising man in the underworld. Yet all this success comes at the cost of Sunwoo’s humanity, as he’s nothing more than a ruthless cold-blooded killing machine. With no emotions or friends, Sunwoo is the ultimate enforcer.

Everything changes when Kang assigns Sunwoo a rather unusual task — to spy on his cheating mistress. Kang wants Sunwoo to confirm she is cheating on him, and gives Sunwoo the green light to kill her if guilty. Yet what Sunwoo finds instead is a beautiful, innocent woman in perilous circumstances (she probably has no control over her relationship with Kang, and Sunwoo knows this). He cannot just simply obey the commands of his boss, for it would take something away from him — his humanity. Why? Why would a cold, ruthless enforcer care for this stranger? That’s the ultimate question for Sunwoo himself, and one he struggles with throughout.

For the first time, Sunwoo makes a decision guided by his own sense of morality, knowing very well it will save the woman’s life whilst putting his own at grave risk. His decision sparks an accelerating downward spiral towards hell — bad decisions lead to more, and his arrogant, stubborn nature only seals his fate.

A Bittersweet Life is a simple tale. The story and its outcomes are evident without much speculation. This is not an entirely new, original experimentation on the gangster genre. You have your cold-blooded enforcer, your ruthless boss boasting a gentle facade. It’s all the familiar pieces we’ve come to know over the years. The magic in A Bittersweet Life is in its superb execution — taking all the familiar parts we know and crafting something familiar, yet unquestionably excellent.

The movie truly felt like a carefully woven mesh of Wong Kar Wai and Quentin Tarantino. It had Wai’s sensibility with lighting and frame placement that certainly evoked classic film noir, but with Tarantino’s sadistic humor and unforgiving violence. Though the film draws influences from both directors, Kim succeeds in creating his own signature aesthetic. Despite being brutally violent and extravagant, A Bittersweet Life felt calm — almost meditative — when I was watching it. It was certainly a spiritual experience, and nothing like any gangster movie I’ve seen before.

I don’t care if you’re not into gangster Asian cinema, you must watch this movie. There’s an authenticity and strong sense of identity in this film that’s very rare, and certainly uncommon in the bloated gangster genre. It’s an honest tale of a man’s misery and his journey for justice. God bless you Korea for making the finest action movie I’ve seen in years. 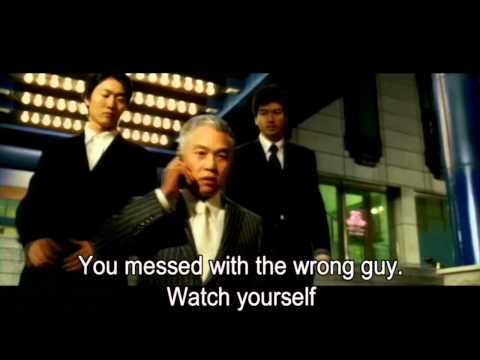