The Fake is a fascinating Korean film that skewers organized religion and explores the darkness of human nature. It's a rare piece that offers both entertainment and meaning; it advances the animated medium as a whole. 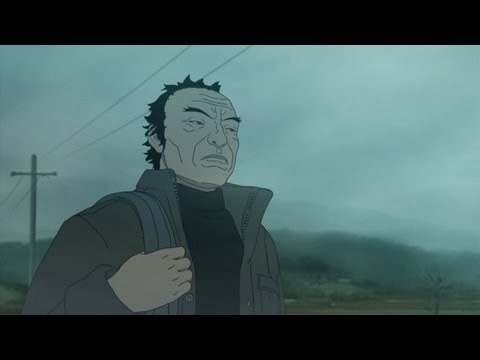 When it comes to thoughtful animated films, we usually think of Japan, home to Studio Ghibli and birthplace of anime. When it comes to plastic-y girl groups and syrupy dramas we usually think of South Korea, home to SNSD and birthplace of Boys Over Flowers. However, Yeon Sang-ho challenges those (and other) stereotypes — he is a South Korean director who makes thoughtful animated films, though his repertoire is far darker than Studio Ghibli’s. Yeon’s independent pieces oftentimes offer blistering social critiques. His 2011 feature The King of Pigs addressed systemic poverty and adolescent bullying, while his short The Window depicted brutality within the context of South Korea’s mandatory military service. In fall 2013 Yeon came out with The Fake, a harrowing film that skewers organized religion.

The Fake opens in a rural village which is about to be flooded with the construction of a new dam. Prospects for the villagers are bleak, and they find hope through their local church. The church’s leadership consists of a charismatic elder named Choi Gyeong-seok and a young pastor named Sung Chul-woo; together, Choi and Sung perform miracles to win the villagers’ faith and sweeten the deal with promises of both salvation and a new church building. However, there’s a catch — there are only 144,000 spots in heaven, and anyone who desires one of those spots will have to donate their savings to the church.

If this seems like a scam to you, that’s because it is one–but the only villager who sees through the ruse is Kim Min-chul, an outcast alcoholic with major anger management issues. Kim’s hardly anyone’s savior. By day he beats his wife and daughter, by night he gambles and drinks his daughter’s college savings away. After getting into a physical confrontation with Elder Choi, Kim vows to tear down the church’s facade, setting the stage for a brutal, bleak battle between a seemingly bad man who tells the truth and seemingly good men who tell lies.

What’s most fascinating about The Fake is its characters. As the film goes on, we come to despise (or at the very least become heavily annoyed with) every single character, even the minor ones. Every single character ends up doing something that you want to slap them for, but every single character also possesses a grain of truth despite their idiocy (which makes you want to slap them again just for being so frustrating). There are no “good guys” in this film — even Kim Min-chul’s wife, for instance, becomes so annoying with her blind faith that you’re almost tempted to join him in beating her. The Fake is that powerful of a film.

All this human darkness becomes great cannon fodder for drama and suspense; it’s like someone mashed Oldboy and The Crucible together and sprinkled some plot twists on top. The Fake‘s story is just indescribably rich with meaning, and it’s one of those pieces that is both entertaining and analyzable. If you want to watch a film where people beat the shit out of each other, The Fake will give that to you. If you want to watch something that muddies the dichotomy between savior and saved, that both affirms and destroys the concept of belief, that pierces into the heart of human nature, The Fake will provide that too.

Obviously, The Fake isn’t for everyone though; if you’re heavily religious, don’t like seeing domestic abuse, or shy away from violence, don’t watch it. However, none of those labels describe me, and I’m highly impressed with the film. It’s up there, along with movies like the 2008 Israeli war documentary Waltz with Bashir, as something that completely destroys the stereotype that animation has to be used for shallow, childish ends.