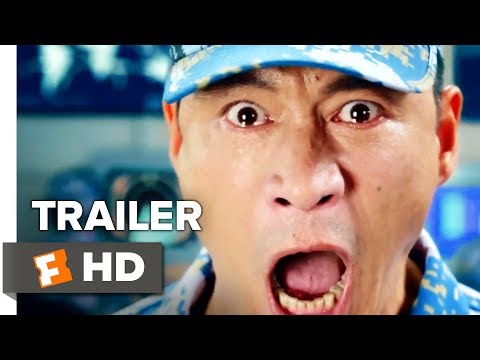 Two years ago we reviewed the original Wolf Warrior film, critical of its bizarre plot devices and weak plot. Naturally, I wasn’t too excited about the sequel that came out just before the 8/1 People’s Liberation Army Day. However, on account of its blockbuster performance, edging out The Mermaid to be the highest-grossing Chinese film ever, I decided to give it a chance — and I’m glad I did. Wolf Warrior 2 (战狼2) is nothing like the thinly-veiled propaganda that its predecessor was; instead, it’s a fast-paced, modern Chinese action film.

To start, we’re introduced to a family whose house is about to be torn down illegally by land developers. In the nick of time, Lt. Leng Feng and his crew of Wolf Warriors, there to deliver the ashes of a comrade who perished in battle, swoop in. After a justice-boner-inducing fight against the land developers’ mob of thugs, Leng is unfortunately discharged from the army and jailed by the police for manslaughter — but not before being reminded by his commanding officer that a “soldier’s duty does not end when he stops wearing his uniform.” Years later, Leng finds himself working in Africa as part of China’s burgeoning economic expansion in the continent, downing bottles of mao tai in drinking battles against the locals — until his idyllic life is interrupted by anti-government rebels.

Forced to flee to the Chinese embassy, Leng and a couple of acquaintances both African and Chinese are rescued by the People’s Liberation Army Navy (but not before making a slight at foreign militaries who are said to have “already retreated”). Leng finds out that a group of Chinese nationals are trapped in a factory, but his new Navy friends are powerless under international law to help — so he sets out on his own to rescue his compatriots, declaring “once a Wolf Warrior, always a Wolf Warrior” (reminds you of the US Marines, no?)

At this point you might be reminded of many Western action flicks — the classic flawed, veteran hero makes an appearance to save innocent victims in the face of a chaotic revolution by a faceless enemy. And this is where Wolf Warrior 2 is truly unique — director Wu Jing has borrowed elements familiar to fans of Die Hard or White House Down, something that hasn’t been so common in Chinese cinema.

A New Kind of Chinese Patriotism

A key challenge of the current Chinese administration has been instilling a sense of patriotism in the latest generation — one that grew up in relative affluence, admiring other countries for their luxuries, and with a vastly different worldview from their parents. Today’s Chinese are much more ready to criticize their government for perceived shortcomings, whether economic, cultural, or societal. And perhaps most alarmingly, a considerable amount of foreign influence operates over the media that today’s Chinese consume — with blockbuster Korean dramas and American films portraying members of foreign militaries correcting injustices in the world and generally saving the day.

China’s media industry has paled in comparison to its foreign counterparts, especially in the realm of action films. Most of the blockbuster hits of the past decade have been dramas involving romance or comedies of daily life, sprinkled with the occasional kung-fu flick. Wolf Warrior 2 breathes new life into the Chinese action genre by copying the pattern of its acclaimed foreign counterparts.

Wu Jing has tackled a number of controversial issues and risked perturbing the fragile social fabric of China — and in the process, upsetting all-powerful censors. In stark contrast to typical Chinese films, Wolf Warrior 2 addresses the issue of illegal land development (often sanctioned by corrupt local officials) by portraying a soldier acting extra-judicially in front of the police — an arguably very American construct. Wolf Warrior 2 also represents the idea of Chinese nationality as jus sanguinis (passed by blood) rather than  jus soli (acquired through birthright), as seen when an overseas Chinese who recently renounced his Chinese citizenship can still seek refuge in the Chinese embassy. Most interestingly, Wolf Warrior 2 also portrays the Chinese military as taking on the role of “world police” (a role that China has historically criticized America for taking on).

Wolf Warrior 2 shows us Chinese propaganda that is willing to embrace the realities of modern society and culture, rather than remaining stuck in “socialism with Chinese characteristics.”

An unintended (or perhaps intentional, given that the Chinese government is known for careful strategic consideration) consequence of this modern Chinese propaganda is its ability to speak to legions of foreign-born Chinese. By toning down the Chinese nationalism of Wolf Warrior 2, the film’s action-hero storyline is allowed to take prominence. While there is no shortage of reminders of China’s emergence as a world superpower (and its friendship with Africa), the Chinese government’s message is not as in-your-face as 1911 or The Founding of an Army.

My Chinese-American friends (and broadly, my Asian-American friends) often lament the lack of Asian-American representation in Hollywood flicks. Indeed, American films naturally gravitate towards white, male members of the US military when it comes to portraying macho strength, giving Chinese who grew up in America few idols to admire. While small progress has been made (Fresh Off the Boat being a contemporary example), beyond the days of Bruce Lee and Jackie Chan few Asian-American male sex symbols have been allowed to permeate the fabric of American society.

Chinese-Americans’ gripe with Hollywood is understandable; many of my Chinese-American friends see themselves as American first, and beyond the occasional trip to the “motherland,” they have a relatively loose connection with their Chinese heritage. At the same time, Chinese-Americans are seen as “foreign” in the eyes of white America — putting them in a hard position where they are neither truly American nor do they feel truly Chinese. Asian-American YouTube celebrities like the Fung Bros have been tackling this struggle of identity, whether it’s the fact that many Chinese-Americans barely speak their mother tongue, or that Chinese food sometimes grosses out Western palettes.

Make no mistake — Wolf Warrior 2 is clearly a work of Chinese propaganda, pushing forth the message of Xi Jinping’s cadres. However, it’s a beautifully assembled work of propaganda that boils the blood in my chest and makes me want to pick up a Chinese flag, tie it to my arm, and wave it around in proud declaration that indeed, I am Chinese.